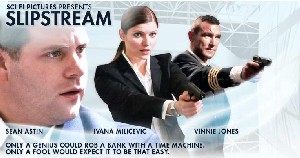 Slipstream (2005)
Only a genius would rob a bank with a time machine.
Only a fool would expect it to be that easy.

He's got 10 minutes to change the past, or his future is history.

Dont all of us wish at times that life came with a remote? Well, that, in short, is the hook in Slipstream, an edgy and entertaining time travel thriller, starring Sean Astin (Sam Gamgee, in Lord of the Rings).

Judging by promos hyping its North American premiere on February 17, 2005, one could be excused for thinking that here was another case of the SciFi Channel just not getting science fiction. What with all the shots of blazing guns, exploding cars and snarling cops in suits and shades, Slipstream looked like just your average weekday UPN fare, one more example of how network niche marketing to genre audiences doesn't differentiate between action films, Hollywood shoot 'em ups, horror flicks, and science fiction. I'm glad I didn't choose to watch on the basis of the previews because Slipstream is a lot better movie than the teaser ads would have you believe. Slipstream is science fiction of the best sort, a film that after all the pyrotechnics and special effects are done, is a story about people using their wits to overcome the daily chaos that threatens to overwhelm them and their plans for the future.

Astin plays ditsy San Jose, California physicist Stuart Conway, packing the PDA of your dreams "borrowed" from his employer in hopes of making a sizeable unauthorized bank withdrawal. Enter Ivana Milicevic (Vanilla Sky, Paycheck) as FBI agent Sarah Tanner, intent on crashing his party, and Vinnie Jones (Lock, Stock, and Two Smoking Barrels) as Winston Briggs --late of Wormwood Scrubs, England--leading a gang of bank heist commandos who come along to spoil everyone's best laid plans. Repeatedly. What a group of British felons is doing terrorizing California is not explained. Leaving that aside, Slipstream enjoys some creditable acting by Astin, Milicevic and Jones, who wrest for control of Conway's handheld temporal displacement unit, that problematically is only safety rated for very brief hops back in time. As the tagline puts it, "He's got 10 minutes to change the past, or his future is history."

There's a lot of rotoscopic action here, bullets and hurled coffee frozen in air, and slow motion dives into the pool. Imagine a cross between Minority Report and Dog Day Afternoon. A big plus for Slipstream is some excellent original music by Rob Lord, which ranges from the operatic to the alternative, from funky to jazz pop. I'd like to see a CD of the soundtrack. You can sample the music on Slipstreams website, which if you check it out, is entertaining in and of itself. The website confirms that the point missed by some of the critical reviewers of the film that this is entertainment, not social commentary, scientific treatise, or a wrinkled brow attempt to push out the bounds of cinematic art.

This movie is fun to watch and funny to boot. Astin has the nebbish act down cold, and Vinnie Smith is a riot as the sociopath gangster who along with his partner in crime, played by Tamsin MacCarthy (Ring of the Nibelungs), both love imagining themselves in the final scene from Butch Cassidy, going out in a blaze of gunfire and glory.

Thats when they're not busy menacing hostages and putting their own lead in the air. Quickly altering realities and shifting timelines make this the kind of movie youd expect to see made from a Philip K. Dick story. As the Astin character puts it, the worlds an evermore complex web, and you're the fly. Echoing Kurt Vonnegut's aliens, without the tyrant grip of time, everything becomes "One long uninterrupted is."

Mostly, we don't really want to rewind life and replay it better a second time. But these guys have the means and find out that by trying to go back to fix things they only make matters worse. What they end up learning is that time machine or no, they always have the power to make the choices in the present that break the chains of expectation and habit that so often make the future a straight line extrapolation of our past trajectory.

All in all, a great job from first-time director and visual effects man David van Eyssen. I'm glad people didn't rip George Lucas apart after his debut "THX-1138". Similarly, here, Slipstream is evidence of promise, and is an enjoyable little romp. Remember, the Internet is full of grumpy people with time on their hands. Don't let the peanut gallery put you off from seeing what to me is one of the more entertaining films I've seen in a while.

About the Reviewer
Carlos Aranaga is a life-long SF connoisseur, world traveler and man of letters, born in the Andes, and who at various times has occupied temporal coordinates in Bangladesh, Bolivia, India, and Maryland, USA.