Primer (2004)
If you always want what you can't have, what do you want when you can have anything?

Directed and Written by Shane Carruth

Primer follows the story of four entrepreneurs struggling to get rich by building and marketing hi-tech gadgets out of their garage. Consisting of a combination of engineers and programmers the group's only success to date has been a piece of computer hardware that they are selling mail order to hackers and home enthusiasts. After work on a new sort of energy field shows promise two of the entrepreneurs decide to cut the other members out of the loop and strike out on their own. As they begin to explore the potential of their new device their partnership is strained to its limits.

If the plot description makes this movie sound like its more about business relationships than time travel, its not by accident. The first act of the film features the setup of the entrepreneurs scheming to build something that will make them rich. Their drive and determination rivals that of a cult like devotion where family and all other obligations become secondary to the main goal. The dialogue in this portion is fast paced, strewn with tech-speak and characters often speak over top of each other in half finished thoughts. The dialogue combined with washed out look of the film make it difficult to follow at times despite a voice-over narration.

After Aaron (Shane Carruth) and Abe (David Sullivan) discover the true nature of the energy field they have created they begin to explore ways of exploiting it for profit. They soon discover its possible to enter the field and travel back in time themselves. The only limitation is that you need to spend a fixed amount of the time in the time machine to travel backwards in time.

The pair develops a routine whereby they turn the machines on in the morning to warm up and then lock themselves in a hotel room for the day to avoid running into their future selves. At the end of the business day they research some stock picks that they can turn a profit on, but whose trading volume is significant enough to hide their actions. With their picks in hand they enter the time machines and travel back to the same morning and exit the machines and go about their day and play the stock market.

Many people Ive spoken to find the time travel in the film confusing and cant follow the logic. I think its partly because you are only seeing the time loop from the linear perspective of the characters and not from the outside. Let me see if I can describe whats going on any better with the use of a visual aide. 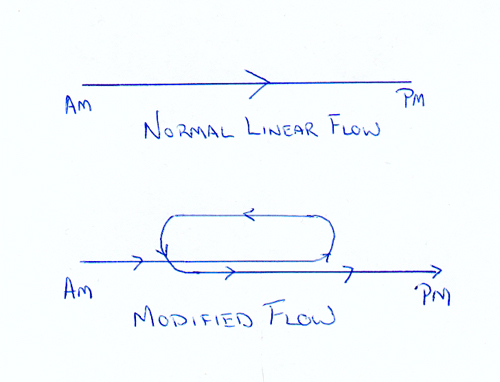 If you take a length of string and stretch it out straight that would be the normal flow of time in a day. Now if you create a loop with that same piece of string you have the loop that Abe and Aaron enter into each day. The point at which the string is doubled is the point at which two sets of men exist. The first set on the continuous path approaching the loop are Abe and Aaron locked in the hotel room. At the same time their future selves have come back in time and are out playing the stock market. The future selves relive the same slice of time and continue on their way without having to get back in the time machine at the end of the day. At one point in the film one character comments on how his body is finally adjusting to the 36 hour days making a reference to the total length of their day when added up.

Where the film breaks down and becomes even more muddled is when director and writer Shane Carruth attempts to expand on the simple premise of the time loop as described above.

Abe and Aaron become fixated with the problem of causality and fear upsetting the timeline when they are reliving the same piece of time. Part of their safeguards includes staying in the hotel for the entire day to avoid running into themselves. Never mind the fact they have already altered the timeline by playing the stock market the second time around. The point soon becomes irrelevant as Aaron starts to entertain revenge fantasies about using the time machine to get even with people. In the end he becomes obsessed with preventing a gun-toting psychopath from showing up at a friends party. The scene and Aarons obsession is a misguided attempt by the director to illustrate the hazards of time travel, but only succeeds in confusing the audience further. Its not so much the mechanics of what is going that is confusing, but rather what the significance of the gunman and the resolution of the scene have to do with the rest of the story. The answer is virtually nothing.

In the final act of the movie its revealed that the two have been separately using the time machine for their own agenda. In contrast to Abes relative caution at exploring the limits of the device, Aarons vision for the technology is to build the biggest device possible so that they can take back in time larger objects and presumably more people. As the narrative of the story catches up with the action, its made known that Aaron has been making longer trips to the past and has been drugging and eliminating earlier versions of himself so that he may assume their role and try to undo some of his earlier actions and to get ahead. While the confession makes for an interesting insight into Aarons mania, its never explained well enough or fully resolved to allow the audience time to digest it. It only serves to further the audiences growing confusion.

As a rule, I dont normally go looking for the moral to a story, but in the case of Primer there seems to be two apparent ones worth considering. The first is that business will always exploit technology for capital gain with little regard given to the consequences. The second is that scientific discovers once released from their proverbial bottle cannot be put back in.

While the film wasn't nearly incomprehensible as I had been lead to believe, I can understand peoples confusion given the execution of the film. In the end I enjoyed it say on par with a flawed time travel movie like Donnie Darko, minus the pop culture references. I'll definitely give this another look see when its released in theatres or when it makes it way onto DVD.

The film opens in limited release in the United States on October 8th, 2004. Please see the official movie site for a complete listing of threatres.

Offical Primer Movie Site
Includes trailer for the movie as well as still photos. There is some background on the making of the film and a list of theatres where the movie is playing in late 2004.
http://www.primermovie.com