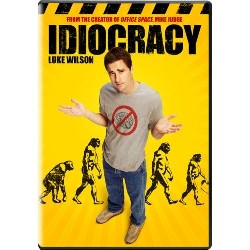 "As the 21st century began, human evolution was at a turning point. Natural selection, the process by which the strongest, the smartest, the fastest produced in greater numbers than the rest. A process which had once favored the noblest traits of man, now began to favor different traits. Most science fiction of the day predicted a future that was more civilized and more intelligent. But as time went on, things seemed to be heading in the opposite direction. A dumbing down. How did this happen? Evolution does not necessarily reward intelligence. With no natural predators to thin the herd it began to reward those who reproduced the most and left the intelligent to become an endangered species."
Narrator - Idiocracy

A satirical look at the dumbing down of America, Mike Judges comedy Idiocracy paints a portrait of dystopian America set 500 years in the future. Lt. Joe Bowers (alternately spelled Joe Bauers), played by Luke Wilson, is literally an average joe who is selected by the US Military to partake in a Human Hibernation Project. Originally slated to be a year long experiment Joe and his companion, a prostitute named Rita (Maya Rudolph), are frozen in individual capsules, but forgotten for 500 years.

When they are accidentally revived in 2505, they find themselves a much different vision of America where corporations such a COSTCO and a sports drink company run much of the world and where the American English language has devolved to a point where its a mix of hillbilly, Valley Girl and inner-city slang, and various grunts.

Now viewed as one of the smartest men in America, average Joe  Joe Bowers  is enlisted by the President of America, to help save the nation from itself.

Filmed in 2005 Idiocracy, Director Mike Judge's first feature film since 1999s Office Space, was given a rough ride by the 20th Century Fox studio who delayed its release and then unceremoniously gave it a limited release usually reserved for indie flicks. Opening in select cities in 2006, including Judges hometown of Austin Texas, the film quickly vanished from screens only to be released on DVD in January of 2007.

Undeserving of being swept under the rug, The satire of Idiocracy manages to be both biting and topical while retaining Judges trademark toilet humour made famous by his early 90s creation of Beavis and Butt-head. Idiocracy takes no prisoners and manages to satirize everything from corporations to government and everyone in between.

Judge has essentially taken the timeless story of Rip Van Winkle by Irving Washington and updated it for a modern audience. As the character Rip Van Winkle was complacent in his own time, so is Joe Bowers in modern America. Both characters awake to find themselves in a frightening new world where much of who and what they know have changed.

"There were rows of houses which he had never seen before, and those which had been his familiar haunts had disappeared. Strange names were over the doors--strange faces at the windows--every thing was strange...a lean, bilious-looking fellow, with his pockets full of handbills, was haranguing vehemently about rights of citizens--elections--members of congress--liberty--Bunker's Hill--heroes of seventy-six--and other words, which were a perfect Babylonish jargon to the bewildered Van Winkle."
Rip Van Winkle - A Posthumous Writing of Diedrich Knickerbocker by Washington Irving

"Unaware of what year it was, Joe wandered the streets, desperate for help. But the English language had deteriorated into a hybrid of hillbilly, valley girl, inner-city slang and various grunts. Joe was able to understand them but when he spoke in an ordinary voice he sounded pompous and faggy to them." Narrator - Idiocracy

Both characters are meek men who rather live their lives in solitude pursuing their own interests, oblivious to the world at large. It is not until they see their future that they realize that they have a personal stake in the welfare of their country and a role to play. As with the original story Joe desperately seeks a way to return to his own time and is in disbelief that he could be in such a world.

Joe becomes convinced that there must be a way back to his own time and that once there he can prevent both his 500 year sleep and Americas long decline. After he learns a time machine may exist in 2505 the movie becomes a quest to stay one step ahead of the law and undo his nightmare. Unfortunately for Joe there is no easy way out and he must eventually accept his fate.

Mike Judge takes a time tested form of time travel as a literary device and makes it his own, skillfully satirizing modern society in the process. A seemingly unlikely movie to pull of being high-brow and low-brow at the same time Idiocracy is worth a look see and certainly will have something for everyone.

Idiocracy @ Wikipedia.org
Wikipedia entry on Idiocracy includes spoilers, details on delay of the film, and links to other references of the film and reviews.
http://en.wikipedia.org/wiki/Idiocracy

Jahozafat.com - Idiocracy
A page of quotes and sound files (wav and mp3 format) from the movie. http://www.jahozafat.com/Movies/Idiocracy.html