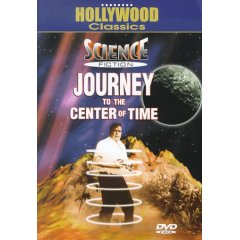 A team of scientists working for a private corporation have developed a working prototype of a time machine that is limited to travelling back in time 24 hrs. The scientists are trying to overcome the limitations of the machine when the owner of the company and their benefactor dies leaving his no-nonsense son in charge. The son, Stanton Jr, sees the funds spent on the research as wasteful and threatens to cancel their program unless they can produce meaningful results.

Determined to maintian their funding the scientific team of three scientists is joined by Stanton Jr. for a field test of the time machine as they try to take into the future. The team accidently finds themselves in the distant future amid a global conflict where they are greeted by a futuristic race that have a dire message for them to deliver to the past.

On their return to the present they encounter near disaster and miss their target and land in the distant past where further tragedy ensues.

Journey to the Center of Time feels like a 1950s B-movie which would be okay if A) it hadn't been made in the late 1960s, and B) it wasn't so damn awful to watch. From the opening credits which incorporate stock images of clocks and swirlng galaxies with a pretenious and overblown voice over about the nature of time, you're already looking for the exits (or in this case the STOP button).

Opening narration from Journey to the Center of Time...


During the span of man's evolution time has been measured by the journey of our plane through the darkness of space. Scientist use our solar system and vast regions of the universe as a giant time keeper.

Time has a quality as hazy as the perimiter of our own galaxy. The haze occasionaly clears for those minds which enquire into the very nature of the fabric of time itself and a glimpse of the true meaning of time is revealed.

Time from creation to now, tugs towards all yesterdays almost as strongly as the unborn tomorrows that stretch towards all eternity. Someday man will strike a balance between these two great universal forces - The Past and The Future and then will man make a fantastic journey To The Center of Time.

Once the journey begins it plays out like some bad SF verison of Gilligan's Island with Stanton Jr. playing the role of a beligierent Skipper and greedy Thurston Howell III roled into one. The plot of this film is non-sensical and seems only to exist to tie together various SF and time travel cliches. The fact that the time machine is powered by lasers and giant glowing ruby should be enough of a dead-giveaway.

The film also features the most annoying use of stock footage to simulate the passing of time since Time Tunnel (1966). Film footage of vaguely historic periods are superimposed over the actors face as the time machine travels through time. Their expressions range from boredom to horror as the images flash before the eyes.

An apparent remake of the 1964 film The Time Travelers, which was also penned by David L. Hewitt, you have to wonder who came up with the money to make this stinker twice?